Charles T. Tart, Ph.D., is internationally known for his psychological work on the nature of consciousness, particularly altered states of consciousness – as one of the founders of the field of transpersonal psychology – and for his research in parapsychology. His two classic books, “Altered States of Consciousness” (1969) and “Transpersonal Psychologies” (1975), were widely used texts that were instrumental in allowing these areas to become part of modern psychology.

Dr. Tart was born a few years before the Second World War and grew up in Trenton, a mid-sized East Coast city. An episode of rheumatic fever when he was 9 kept him from school and in bed for months, but a visiting teacher gave him a love of learning that he is eternally grateful for. While still a teenager he fell in love with science, especially electronics, He was active in ham radio, and learned enough electronics to work his way through college as a radio engineer. He was raised as a Lutheran, and his personal struggles with the conflict between religion and science he experienced as a teenager created his lifelong career focus of trying to build bridges between genuine science and genuine spirituality.

Charley, as his friends call him, went to college to study electrical engineering at MIT, but while there discovered that he could become a psychologist and thus, he hoped, pursue his deep interests in the nature of the mind and parapsychology. He received his Ph.D. in psychology, with research on influencing night time dreams by posthypnotic suggestions, from the University of North Carolina in 1963, and then received two years of postdoctoral training in hypnosis research at Stanford.

The Secret Science of the Soul: How Evidence of the Paranormal is Bringing Science & Spirit Together
$19.95
Buy from Amazon.com

Waking Up: Overcoming the Obstacles to Human Potential
$22.95
Buy from Amazon.com

Mind at Large: IEEE Symposia on the Nature of Extrasensory Perception (Studies in Consciousness)
$15.70
Buy from Amazon.com

States of Consciousness
$16.99
Buy from Amazon.com

Psi: Scientific Studies of the Psychic Realm
$14.95
Buy from Amazon.com

On being stoned;: A psychological study of marijuana intoxication,
$969.00
Buy from Amazon.com 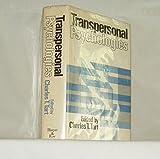