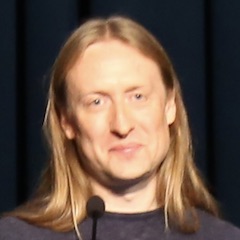 Graham Nicholls is an author and artist born in London, England. From a young age he underwent various unusual experiences including visions, clairvoyant perceptions and later out-of-body experiences. He first came to public attention as an artist exploring psychology and consciousness through specially designed technological environments, the largest of which was exhibited at London’s Science Museum in 2004. More recently he has focused on writing, with the publication of, Avenues of the Human Spirit, his first book, and Navigating the Out-of-Body Experience, following soon after (April 2012).

Over the last decade he has lectured widely on his spiritual, social and psychical viewpoints both in the UK and abroad at venues such as Cambridge University, The London College of Spirituality, The Theosophical Society and the Science Museum. After more than 24 years and hundreds of out-of-body experiences (also sometimes called astral projection) he is a leading expert on the subject. He has conducted scientific experiments into telepathy and precognition with author and biologist Rupert Sheldrake, as part of the Perrott-Warrick Project, supported by Trinity College, Cambridge.

Since around 2004 Graham Nicholls has appeared in most of the major press as a result of interest in his art, spiritual experiences and philosophy. He has also been interviewed in: The Times, The Independent, The Telegraph, The Daily Express and on BBC radio, as well as many overseas and independent publications, radio and TV.

IRVA 2014 – Perceptions Beyond the Body: Remote Viewing and Out-of-Body Experiences

There has long been discussion around the crossover between Out-of-Body Experiences (OBEs) and Remote Viewing. While exact details of the sensory levels within Remote Viewing have been explored, little has been detailed regarding their relationship and the fascinating correlations that exist between OBEs and Remote Viewing.

Drawing upon research begun in 1987, I attempt to bridge that gap, using examples from my personal OBEs and those commonly referenced in the literature. Certain common factors seem to exist within OBEs and Remote Viewing sessions. Highlighted characteristics are present when my OBEs are veridical. These same elements are noticeably present in my Remote Viewings, just in a subtler form. Correlations seem to relate to bands of the electromagnetic visible light spectrum. Additionally, in RV there are often issues identifying object scale correctly at target locations. Likewise, in NDEs and OBEs there is also a scale factor present.

These insights into how Remote perception might work, show that the training of Remote Viewing, use of immersive technology and the depth of experience of the OBE gives raise to an enhancement of RV and OBEs.

Avenues of the Human Spirit
$16.57
Buy from Amazon.com