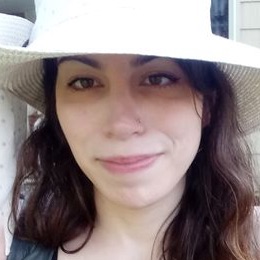 Dani Caputi, Ph.D., received her doctorate  in Atmospheric Science at the University of California, Davis. Her research focuses on ozone pollution and nocturnal mixing dynamics in the southern San Joaquin Valley. Additionally, she has initiated several mind-matter interaction experiments that explore the possibility of mentally influencing the weather, and has introduced the selection problem of consciousness to the literature. As part of her program, she is a certified flight scientist for Scientific Aviation Inc.

I introduce a model that attempts to bridge the gap between psi research and some deep philosophical questions about consciousness, such as the hard problem and the selection problem. The selection problem is introduced here as a unique extension of the hard problem: while the hard problem asks "How does a physical system becomes conscious?", the selection problem asks "Once conscious, how does the conscious physical system become a particular self?". It is argued that these problems appear to be connected to the phenomenon of true randomness, and further exploration into the nature of mental interaction with random events will help elucidate a full theory of consciousness. In many mind-matter interaction experiments, random number generators that take advantage of quantum uncertainty have been used, but we note that turbulence in fluids is a non-linear process that may also be truly random in nature. The non-linearity implies that small effects of mental interaction with turbulence may be amplified to magnitudes that make the phenomenon more visible. Preliminary results from two experiments will be presented here. In one experiment, participants (in an online interface) attempted to influence turbulent wind fluctuations measured by a sonic anemometer in Davis, CA. In another experiment, a random event generator (TrueRNG) is placed on an aircraft operated by Scientific Aviation, Inc. The TrueRNG output was significantly more ordered when flying through regions of convective turbulence (z=3.67, p=0.0002, two-tailed). These findings hint at the possibility of a deep connection between quantum randomness, turbulence, and consciousness.