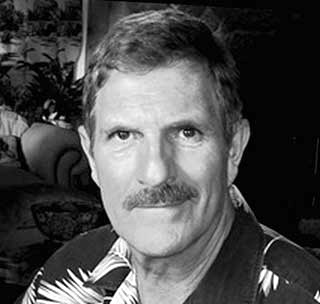 Dick Allgire spent a long and distinguished career as an award-winning television news journalist from 1974 -2012. He was an anchorman, reporter, and producer at KITV, the ABC news affiliate in Honolulu, Hawaii.

In 1997, Allgire became fascinated with remote viewing, a military intelligence tool that was released into the public domain in the late 1990’s. Allgire met and studied with top experts in the field, and trained extensively for nearly two decades with a retired member of a US Army Special Forces Intelligence Team.

Allgire’s remote viewing work has been well documented in published sessions, public and private projects, scientific peer-review studies as well as on-line presentations. He has been a member and has served on the the board of directors of several of the leading non-profit remote viewing organizations internationally.

Can remote viewers affect the past and cause an effect that will be evident in the present? This presentation is a look at a session, done blind by a remote viewer, on camera with video recording the session. The viewer clearly hits target. But there is more to the project. The viewer attempts to impregnate the target location with a message, to see if the message will show up across time. Photo evidence will be presented which will make you think.

This project explores masking and entrainment. Masking is the art of arbitrary target design to facilitate the extraction of data to be extrapolated to another unrelated target area. In other words you design and create a target to represent the masked target. The data produced by a viewer working the mask represents data congruent to the masked target.

Remote viewers using various disciplines- including CRV, SRV, HRVG, and ERV- were tasked with a mask target. The target was ?Tanner Dam? a fictitious earthen dam created, visualized, and given analytical servicing by the tasker. The dam represented a mask of the actual target, which was the New York Stock Exchange.

The design of the mask and entrainment was to have activity at the Tanner Dam mirror activity at the New York Stock Exchange. At the conception of this project (June 2008) the Dow Jones average was over 12,000. When the mask target was tasked and sessions worked (July-August 2008) the Dow Jones average was well above 11,000. The timeline in the tasking was ?near future? (looking ahead 90 days.)

What happened at Tanner Dam in the fall of 2008?

An introduction to the remote viewing method used by the Hawaii Remote Viewers’ Guild. The presentation will discuss the theory behind the acquisition of visual imagery. It will highlight the importance of using Ideograms to capture gestaltic and sensory target data. And it will show the logical progression of perceiving data and imagery using a highly structured and intuitive method. The presentation will feature numerous examples of actual remote viewing data obtained under blind/double blind protocols, and will explain the theory behind how it was acquired.

This presentation will feature a project worked by viewers at the Hawaii Remote Viewers’ Guild. An anonymous client who was geographically distant from HRVG tasked the target. The target was worked under double blind conditions by four viewers. Low-level analysis was conducted by a trained analyst who also worked under a double blind protocol.

The presentation will include the total data submitted by the viewers, and show how all viewers produce a combination of good data, contamination, and imagination. It will illustrate how analysis is able to separate the good data from the contamination. It will also demonstrate the importance of reduction. Reducing the data to its lowest possible gestaltic value enables the analyst to take data that is essentially target-related yet misconstrued by the viewer, and present it in a manner that keeps it true to target. The project demonstrates how viewers and analysts are able to rely on remote viewing structure and analytical protocol to answer questions posed by the client.

The process of analysis will be illustrated, and the final product shown. The scenarios produced by the blind analyst will be presented, showing how the extraction of consensus data and reduction of that data is able to answer the essential elements of information requested by the client.

One of the major shortcomings within the field of remote viewing is the failure of the skill to quantify unknown locations in the course of routine remote viewing work. How many targets have been worked to find a killer? How many killers have been found? How many lost treasure sites have been searched and how many treasures found? All because the skill of determining geographic location has not been designed, developed, or incorporated into Remote Viewing methodologies. Until now.

This presentation will detail the history, development and application of Remote Viewing Direction Finding and will show actual examples of data produced in session by remote viewers working against both known validation and operational targets.