Dean Radin,Ph.D., has been Senior Scientist at the Institute of Noetic Sciences (IONS) since 2001. His early career as a concert violinist shifted into science after earning a masters degree in electrical engineering and a PhD in psychology from the University of Illinois, Champaign-Urbana. For a decade he worked on advanced telecommunications R&D at AT&T Bell Laboratories and GTE Laboratories; for over two decades he has been engaged in consciousness research. Before joining the research staff at IONS, he held appointments at Princeton University, University of Edinburgh, University of Nevada, and three Silicon Valley think-tanks, including SRI International, where he worked on a classified program investigating psychic phenomena for the US government. He is author or coauthor of over 200 technical and popular articles, a dozen book chapters, and several books including the bestselling The Conscious Universe (HarperOne, 1997) and Entangled Minds (Simon & Schuster, 2006). His technical articles have appeared in journals ranging from Foundations of Physics, to Psychological Bulletin, to Journal of Consciousness Studies. He has appeared on television shows ranging from the BBC’s Horizon and PBS’s Closer to Truth to Oprah and Larry King Live, and he has presented over a hundred invited lectures in venues including Cambridge, Harvard, Stanford and Princeton Universities, Google headquarters, DARPA, and the Navy.

What is it that makes ESP actually work? How can it be explained scientifically? Questions such as these have puzzled people for decades. In this presentation, Dean Radin, senior scientist for the Institute of Noetic Sciences gives a fascinating account of a quantum phenomena that may be the long-sought answer. Using entertaining graphics and a lively presentation style, Dr. Radin tells us about the levels of psychic ability, the kinds of ESP, and the cosmology of psi. In no time he is explaining in a very understandable way how a quantum “entanglement” or “nonlocality” may be the crucial hint that leads us to the breakthrough many have looked for for years. He gives us a natural history of forms of entanglement (including something he calls “Sexy Entanglement” – you’ll have to watch to find out what that is!), and concludes with a powerful account of the growing scientific evidence for ESP. As a bonus, Dr. Radin lays out for us a double-blind experiment with amazing results that he did to validate Dr. Masaru Emoto’s “Messages in Water” claims. The presentation wraps up with a lively question & answer session.

Dean Radin is the moving force behind one of the largest online remote viewing/ESP tests ever. This is what he has to say about it:

“As of April 25th, we have recorded a total of 2.1 million trials, contributed by over 14,000 participants from 92 countries. In these tests we were interested in searching for possible psi talent, for testing hypotheses about individual personality, belief and environmental factors vs. psi performance, and for examining some ideas about perception through time.” 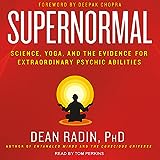 Supernormal: Science, Yoga, and the Evidence for Extraordinary Psychic Abilities
$26.09
Buy from Amazon.com

The Conscious Universe: The Scientific Truth of Psychic Phenomena
$13.59
Buy from Amazon.com

The Noetic Universe
$97.99
Buy from Amazon.com

1. Remain respectful of other members at all times
All posts should be professional and courteous. You have every right to disagree with fellow members and explain your perspective. However, you are not free to attack, degrade, insult, or otherwise belittle them or the quality of this community.

2. No Spam / Advertising
‘Spam’ includes unsolicited advertisement for goods, services and/or other web sites, or posts with little, or completely unrelated content. Do not spam the forum to self-promote your own website or business.

3. Do not post copyright-infringing material
Providing or asking for information on how to illegally obtain copyrighted materials is forbidden.

4. Do not post offensive posts, links or images
Any material which constitutes defamation, harassment, or abuse is strictly prohibited. Material that is sexually or otherwise obscene, racist, or otherwise overly discriminatory is not permitted in the forum. This includes user profile pictures.

BY USING THIS FORUM YOU AGREE TO THE ABOVE RULESI AGREE
×
We use cookies to ensure that we give you the best experience on our website. You can learn more about our cookies in our Privacy Policy.Ok